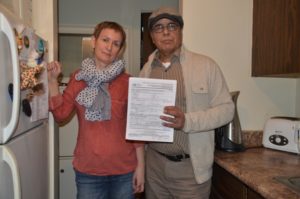 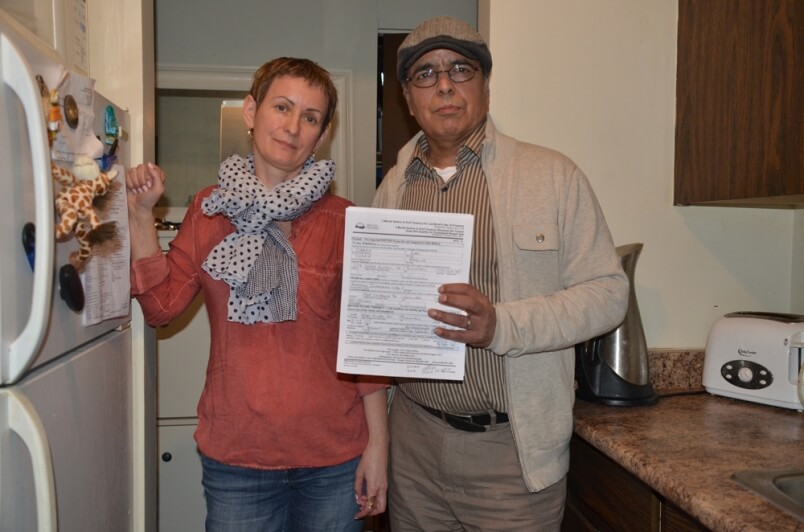 A Burnaby couple facing “renoviction” is breathing a sigh of relief after a lawyer took on their case pro bono and came to the conclusion there’s no grounds to evict them.

Last month, the NOW reported how Rafi Charif and his wife Natalia, along with a handful of other families at Claremont Terrace were given a two-month eviction notice.

Because they pay one of the lowest rents in the building – $884 for a one bedroom – the pair said the property manager, Ambassador Industries Ltd., wanted to jack up the rent. In order to do that, the company claimed the suite needed to be renovated and the couple would have to move or agree to pay $1,200 upon their return.

Work included new cabinets, countertops, sinks and faucets in the kitchen and bathroom, as well as new carpets, blinds, closet doors, flooring and an update to the electrical panel. Crews would need at least one month’s time to finish the work, according to the eviction notice.

Property manager Simone Greaves defended the renovations and said if the rents are not increased, the building will go bankrupt due to rising property taxes and high city fees.

After reading the NOW’s story, Neal Steinman of Vancouver-based Steinmans Trial Lawyers offered his services to the families free of charge.

“These situations present the potential for landlords to take advantage of tenants,” he said.

Steinman had a contractor walk through Charif’s apartment and noted many of the proposed renovations had already been completed. Many of the furnishings were “in excellent condition.”

“This is a situation, in the contractor’s opinion, where the tenants could leave the unit for several days while the landlord’s own trades removed and replaced the carpets, flooring and kitchen cabinets, the most time-consuming of the landlord’s proposed renovations,” Steinman said.

“The right action, in our view, (is) for the landlord … to withdraw the Notice to End Tenancy. We are hopeful a resolution will be reached which allows the Charifs to stay in their unit for another year at the current rent, which could only be increased by the amount allowed under the law.”

The couple is looking to eventually move into co-op housing and said and extra year would give them some breathing room.

“We are very happy,” Charif said of Steinman’s work, noting their case goes before the Residential Tenancy Branch on May 9. “We are so grateful.”